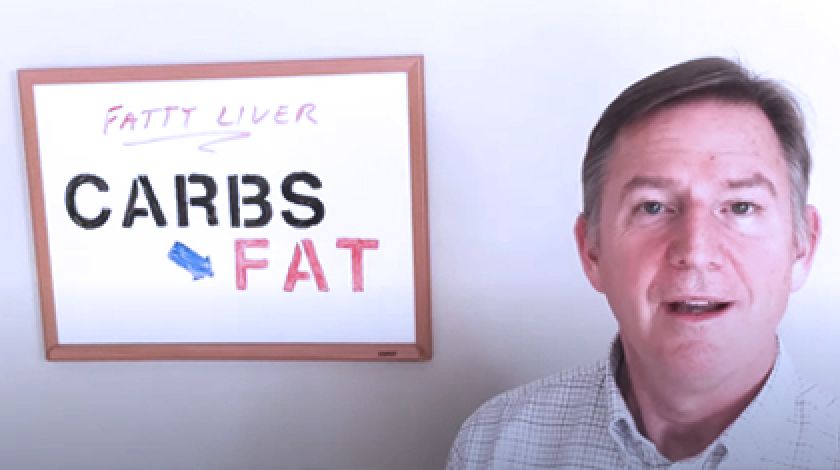 Dr. Westman discusses fatty liver, the causes, the consequences and how to fix it in the article below.

Fatty liver is actually becoming one of the most common reasons for a liver transplant today, however, this was not the case 20 years ago. Fatty liver was merely a blip on the radar, and now it’s a common reason for liver transplants. “I get a lot of referrals to my clinic at Duke to treat the fatty liver, because the biopsies show that not only is there fatty liver, but it’s progressing toward cirrhosis,” explains Dr. Westman

Fatty liver is a devastating problem that leads to people needing liver transplants. A liver transplant, or any transplant for that matter, is not something you want to have to go through, it’s a big deal. “Sadly I’ve had to counsel people when the fatty liver comes back in the transplant,” says Dr. Westman. It turns out that it was actually the carbs in the food that created the fatty liver. The idea of carbs turning into fat is a common theme in Adapt Your Life’s videos and articles.

The sugar and the starch in your food actually get processed in your liver and turns into fat. When the energy system is full, and you still have excess energy around, you develop dominant obesity, and fatty liver develops as well. Usually they go hand in hand.

Having spent a semester of college in France, Dr. Westman learned that “foie gras” which is fatty liver (a delicacy in France) was actually made by force-feeding geese carbs or figs in the days of ancient Rome. Today, we use corn to replicate these results, but we can surmise that foie gras or fatty liver is not created by feeding geese fat, it’s from feeding the geese carbohydrates! The same thing happens in people, the sugars and the starches get turned into the liver fat. If high-carb foods cause fatty liver, then surely low-carb foods may just be the cure.

You can fix fatty liver in as little as just four to eight weeks, along with that, your blood triglycerides will go down. The triglycerides are the export product that presents itself when the liver is filled up with fat and starts sending out the fat on triglycerides, so you’ll usually see high triglycerides in the blood at the same time.

You can fix it by adopting a low-carb diet, Dr. Westman uses the keto diet in his clinical practice all the time in order to help his patients fix their fatty liver. He’s also published a paper along with Dr. Yancey that included five people over the course of six months. These individuals were carefully tracked over the six-month period with liver biopsies, the fatty liver went away in the four of the five people who followed the keto diet, they also lost weight which was an added bonus. The fatty liver actually progressed and got worse in the one person who was not able to follow the diet.

If your liver failure is really bad as in the case of cirrhosis, and you’re not able to have normal liver function, it’s advised that you speak to  your doctor before even thinking about starting the keto diet. Your liver may not be able to make enough sugar or enough glucose, so it’s important that you talk to your doctors about that.

However, with early fatty liver or fatty liver where there’s just mild cirrhosis, it’s considered safe to do a keto diet. If you’re on medications, it’s advised that you go through this with a trained practitioner. Sometimes doctors don’t even mention that you’re in the early stages of fatty liver because it’s so common these days, but it’s a sign that you may want to take action and not develop the long-term consequences of fatty liver.